After several months of waiting, ABC has begun airing BattleBots. It can be seen locally on WCPO Channel 9. For those of you unaware, one of the competing teams built their BattleBot at The Manufactory.  Team Moebius, lead by member Michael “Shaggy” Macht with a lot of assistance from The Manufactory’s own Education Coordinator, Seth Cohen, instructor, Dave Menchen and several others, literally burned a lot of midnight oil constructing a wicked spinner robot.

The group has been very closed mouth about what happened at the competition.  The $1,000,000 non-disclosure agreement they signed might have something to do with that! 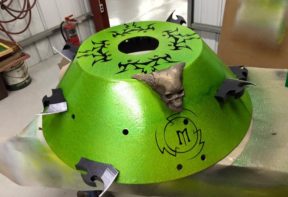 Moebius has been one of the most interesting builds we have had at The Manufactory. It is basically a massive spinning semi-cone shaped armor shell with 3D printed metal talons that serve to shred the competition’s robot to pieces. Underneath is a complex chassis of 1/2″ CNC machined aluminum plate that serves to support the enormous main spinner motor, drive wheels, motors, batteries and electronics. In a nutshell, very scary, is the best way to describe it. Here is a video that shows it on one of the first functional tests in its more benign form without the armor /weapon.